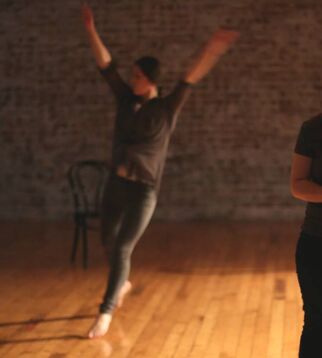 Imogen is an independent dance artist based in South London. She trained at London Contemporary Dance School and Purchase College, New York graduating in 2011 with a first class BA (Hons). In 2017 she received her Postgraduate Diploma in Arts Policy & Management from Birkbeck University.

Her work has been performed in various UK venues and festivals, such as The Blue Elephant Theatre, Resolution! 2013, Barbican's Pit Theatre, High Tide Festival 2013, Dance Live Festival 2014 and Spontaneous Combustion Festival 2015 among others. She has received support from Dance Digital, Help Musicians UK, Huddersfield University, Sound and Music and crowd funding campaigns. She offers workshops in improvisation and choreography as well as advisory sessions for emerging artists.

​Imogen focuses on collaborative work with performance artists, composers and musicians. She co - founded Sounding Motion, 2011 - 2017, a collective where live music and dance share the stage on equal footing. They led cross - art workshops with undergraduate composers at Huddersfield University and created performances with new and established contemporary - classical works.
​
Her primary interest is in experimental work conceived from improvisation and enjoys challenging her approach to dance making and performance often conveying a story inspired by the personality and individuality of the artists involved shifting between conceptual and theatrical approaches.

In 2019 she formed Experiment 6, an artist -led group which creates platforms and opportunities in South London for choreographers, aiming to increase access to experimental work and reach new audiences. Visit the website for more details: www.experiment6uk.weebly.com
'Imogen Bland’s Naturale for Sounding Motion did what the company’s mission says in the name with an elegant capsule of integrated live music and dance.' – Graham Watts, Member of the Critics' Circle

​Everything about this collaboration impressed me. No narrative or sentimentality is required in a piece of such eloquent form and distinct musical colour.'” - Jessica Sabatini, Freelance Dance Writer

'Where she stands, and her decisive, shifting engagement with direction in the space, conjure up geometrical fields for the percussive score to colour, drip down, go boing off and slice through.'- Martine Painter, Bellyflop Magazine